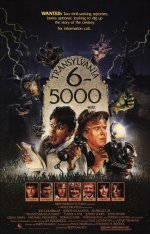 No, not the Bugs Bunny cartoon. Although I probably would have laughed more if it had been. Scratch that, I definitely would have laughed more. Transylvania 6-5000 was written and directed by Rudy De Luca; while it’s his sole film directing effort, he has written several other comedies, particularly four for Mel Brooks. Unfortunately, Transylvania 6-5000 is more on the quality level of Life Stinks than of High Anxiety or Silent Movie — it’s not out and out terrible, but it’s unlikely a lot of people are going to cite it as their favorite comedy. (I’d compare it to Dracula: Dead and Loving It, as there are thematic similarities, but I haven’t seen that one yet.)

Transylvania 6-5000 (1985) stars Jeff Goldblum and Ed Begley Jr. as Jack Harrison and Gil Turner, reporters working for a tabloid newspaper. When Gil receives a tape purporting to show Frankenstein’s monster, the paper’s editor (and Gil’s father), played by Norman Fell, sends them to Transylvania to investigate — with the warning that they had better come up with an interesting story, or they’re both fired.

They soon get to a town in Transylvania, where they find that their hotel manager (Jeffrey Jones) is also the town mayor. The townsfolk laugh dismissively at the idea of there being real monsters in Transylvania. Gil’s a believer and wants to keep investigating, but Jack is skeptical and instead begins hitting on an attractive fellow tourist (Teresa Ganzel). While picnicking with Elizabeth, however, Jack and Gil discover that there might just actually be monsters — plural — in the area. They try to investigate local mad scientist Malavaqua (Joseph Bologna) but run into interference from the local authorities. And when Elizabeth’s daughter goes missing, the investigation takes on a new sense of urgency.

Transylvania 6-5000 pays homage to a lot of the old monster movie classics, with many of them showing up for small roles (though most are with local actors and are essentially non-speaking parts). Besides the Frankenstein monster, there is also a twisted man and a mummy. There’s a werewolf (looking rather like the main character from Teen Wolf), and though you wouldn’t recognize him under the make-up, it’s Donald Gibb — best known as “Ogre” from Revenge of the Nerds. And Geena Davis gets a decent amount of screen time as the vampire Odette. 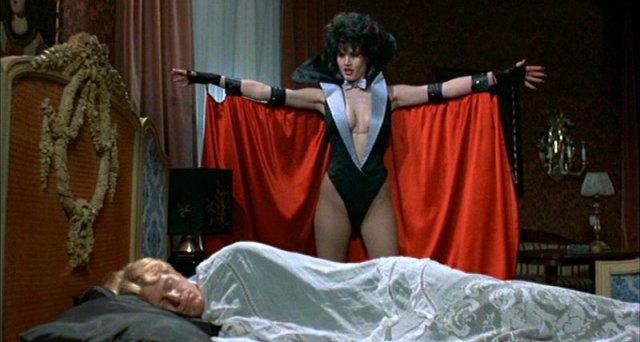 I can see how Gil immediately knew she was a vampire, but how he mistook her for Dracula is beyond me.

Transylvania 6-5000 has a good premise and a decent plot, and the principal actors are all skilled and experienced. Where it falls short, sadly, is in the comedy aspect. The main characters simply aren’t given very many funny lines, and the situations aren’t funny enough to generate laughs on their own. It appears that De Luca decided to make the hotel staff the “comic relief” of the film, and it’s only partly successful. Michael Richards plays Feyos, who is constantly playing practical jokes and trying to get a laugh out of the reporters. The character falls into the usual pitfall of characters who are meant to be annoying and unfunny to the protagonists: they’re annoying and unfunny to the audience as well. Working much better is Radu, played by John Byner, who gets a healthy assortment of almost subvocalized sarcastic remarks as he deals with the indignities that come with his compulsive subservience. His wife, Lupi, is played by Carol Kane, who unfortunately suffers a bit from the same lack of funny lines to deliver; being Carol Kane, however, she still nearly steals every scene she’s in.

With its cast and premise, Transylvania 6-5000 had a lot of potential as a film. Unfortunately, the writing simply didn’t deliver on that potential. It’s not a bad film, but it’s not a particularly memorable one either.