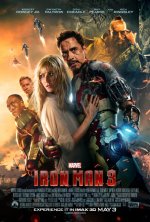 Trilogies seem to be a tough thing for superhero movie franchises. Almost inevitably, there’s one film — generally the third — which proves to be a letdown, no matter how good the initial film was. In the case of the Iron Man franchise, I actually thought the second film was a bit of a disappointment. Not a bad film, by any stretch… just not quite good enough to really be a worthy sequel. So I viewed Iron Man 3 with a touch of wary optimism. The question was, would it represent an uptick in quality, or would it be a further slide?

Of course, being a Marvel Comics movie, it doesn’t exist in a vacuum. The Avengers took place between the second and third film, and while there aren’t a lot of explicit references to the other characters, the events of that film inform this one. And while it may cause a slight knowledge gap for viewers who missed that installment (few though they may be), it isn’t a significant one, and using The Avengers as a springboard for some of the film’s issues helps it considerably.

In Iron Man 3, the “events in New York” (which is about as explicit as the film gets) have taken their toll on Tony Stark (Robert Downey Jr.) His armor was battered and bashed, and he’s been making repairs, improvements, and new versions… but it’s not the armor that’s in trouble. The film is about the man inside the machine, not the machine itself — in fact, both Downey and Don Cheadle spend quite a bit of time outside their respective armors in this film. Stark is traumatized by the events of The Avengers, and has trouble sleeping at night. He’s constantly worried about what might happen to Pepper (Gwyneth Paltrow). He has panic attacks, an unfamiliar experience for the guy who was always cocksure about everything. He denies having PTSD, but it’s not a very effective denial.

This provides the emotional backbone of the film, and it’s one that is seldom explored in such depth in a superhero film — or, indeed, in a superhero story in any medium. It’s a good decision not just for the film, which is enjoyable even when Stark is dealing with his issues and not blowing things up, but for the genre in general. It shows, as a few other films in the genre have started to show, that it can be more than just “You bad guy, I punch you.” (No offense intended to the Hulk.) There’s also a continuing thread from the previous films with the question of responsibility, and to what extent Tony creates his own enemies.

Of course, since this is a superhero movie, Tony doesn’t have a lot of time to dwell on his trauma without dealing with further trauma. A business rival (Guy Pearce) is trying to woo Pepper, both for his think tank and himself, and may have shadier dealings. And of course, there’s a villain out to cause terror and destruction in the form of Ben Kingsley as the Mandarin. Now, I have to admit the Mandarin is one super-villain I don’t know much about from the comics. I didn’t read a lot of Iron Man when I read comics, and the issues I did read didn’t deal with the Mandarin. He always struck me as a bit of an odd match for the hero; an ancient Chinese wizard doesn’t quite fit when going up against a man in a robotic suit. For the film, he’s changed significantly. The magic is gone, but the ruthlessness remains. The Mandarin of the film is a terrorist ringleader who orchestrates bombings in the United States and then proselytizes about them on television, hijacking the airwaves for his own propaganda. I do not know how a purist might feel about the changes to the character, but I will say that for myself, this persona worked as a villain. The Extremis soldiers — people who are able to regenerate and heat their bodies up to extreme temperatures — are also interesting (even if they’re effectively just glorified mooks), and provide a credible threat. Perhaps most importantly, the villains in this film aren’t guys in knockoff Iron Man suits, providing a necessary divergence from the previous films.

All in all, the film was considerably more entertaining than the second one, though it doesn’t quite live up to the first. It has a few flaws to it, though nothing too serious. First, the sequence where Tony recuperates in a kid’s garage, while funny, kills the momentum of the film a bit. The breather is welcome, but it goes on a tad too long. And second, the film is very unsubtle about its foreshadowing. There are still some surprises, but it’s mostly in the fine details, and not the general gist of the twists.

Also, one note for those interested, not really good or bad. It’s a Shane Black film, so yes, it’s set at Christmas. I have a feeling it’ll be joining Lethal Weapon and Kiss Kiss Bang Bang in a lot of peoples’ non-Christmas Christmas movie marathons.