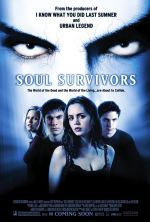 Billing displacement is an odd thing to observe in movies. Consider the poster at left. Eliza Dushku is not the star of Soul Survivors, but she’s certainly the star of the poster. Presumably she was placed front and center in hopes that her greater fame (albeit still rather modest back in 2001 or today for that matter) would be a draw for people even though her role is a supporting role. Behind her, Casey Affleck and Wes Bentley; both currently rising stars, and though again their stardom wasn’t as big back in 2001, they were each known names to some degree. The actual lead in the film, though, is that blonde girl whose head you can just barely see off to the left. That’s Melissa Sagemiller, and though this relatively obscure picture probably wouldn’t have lifted her into major stardom anyway, one still can’t help but feel a little sorry for her that the film’s own poster practically disowns her.

It gives entirely the wrong impression as to her role and her performance, as it’s her responsibility to carry the film. And while the film is by no means remarkable, her performance in it is fairly good. 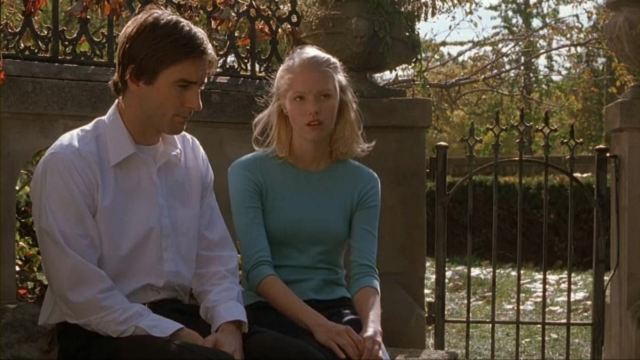 I’m half surprised they didn’t make Luke Wilson the focus of the poster.

Soul Survivors is, as one might guess from the title, a ghost story about the survivors of an accident. A group of college freshmen who grew up together decide to attend a rave on their last night together before some of them go off to different colleges. Exiting the rave, Cassie (Sagemiller) gets into an argument with her boyfriend Sean (Affleck). As the foursome drive off, the weather, drinking, and arguing combine to distract Cassie as another car, full of some demented ravers from the party, spins out in front of them. The film then jumps to a few weeks after the collision. Cassie, Matt and Annabel (Bentley and Dushku) are alive and recovering, attending college. Sean is gone… but not completely. Cassie keeps seeing him, hearing him. He wants her to join him. And she keeps having other visions as well, odd occurrences that can’t be explained, and sightings of the ravers who harassed her at the party. They may have died in the car crash, but that is of small comfort when they seem to be trying to kill her.

How is it that a transparent mask is creepier than an opaque one?

Characterization in the film is not exactly very deep. This is probably more the fault of the writer-director, Stephen Carpenter, than of the actors. Affleck, Bentley, and Dushku all do reasonably well in their roles, but there’s not much meat to any of them. Dushku’s character will feel familiar to her fans, particularly from her Buffy the Vampire Slayer stint, as a girl who is tempted by the darker side of life. Bentley and Affleck’s characters both appear to just be standard dogged nice guys; there’s very little to distinguish them from each other, let alone from the thousands of “generic boyfriend” ciphers in film. It’s mostly the result of these characters not being very developed; all put together, they don’t get half as much screen time as the main character. Not that the character of Cassie is especially deep either — we never get the remotest sense of why she cares about any of these people — but the writing is at least more interesting with her. Unlike some ghost stories, Soul Survivors broaches the question of whether Cassie’s experiences are the result of her head trauma from the accident, and Melissa Sagemiller sells the idea that her character isn’t completely convinced of her own sanity.

The other standout performance in the film is Luke Wilson, as the preacher Jude. It is likewise a case where it’s the actor making the character come to life. Wilson, being more veteran than the other actors (and it’s an odd feeling using the word “veteran” regarding Luke Wilson), is correspondingly more comfortable with his character. It’s a simple role that doesn’t require a lot of theatrics, and Wilson doesn’t oversell it. He just looks like he genuinely belongs in that role, while some of the other actors are a little more visible in their acting.

The story isn’t especially novel, and the secret behind the supernatural happenings is easy enough for a genre-savvy viewer to figure out halfway through the film. It isn’t a film that is likely to frighten the audience, but it’s not really trying for that; it instead tries to sell the audience on the fear of its main character, and to that extent it is successful. It’s entertaining enough while it’s on. But it’s a film that is unlikely to be remembered long after its viewing, for good or ill.