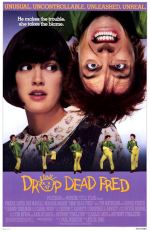 There are a lot of reasons why a film may become a cult classic, but it’s always easy to spot one. Find a title that isn’t talked about often, particularly not among critics or awards shows or all time sales charts. Then ask around about it. If nine out of ten people give you a blank stare and the tenth says “Oh my gosh, I love that movie!”, you’ve found one. Something about cult classics means their reception is always split between a small group of people who disliked it, a slightly larger group of people who loved it — almost never merely liking it — and a vast group of people who have never heard of it.

Sometimes the blame can be put down to a disconnect between professional critics and the viewers. If the critics don’t like it, it can reflect poorly on the box office, which leads it down the path to obscurity. This may be what happened to Drop Dead Fred. A box-office bomb, it was critically blasted… but those who remember it generally remember it positively, especially those who were young when it was released in 1991. The cause of such a disconnect isn’t always clear, but here it may be that the blame lies with its title character, played by Rik Mayall. 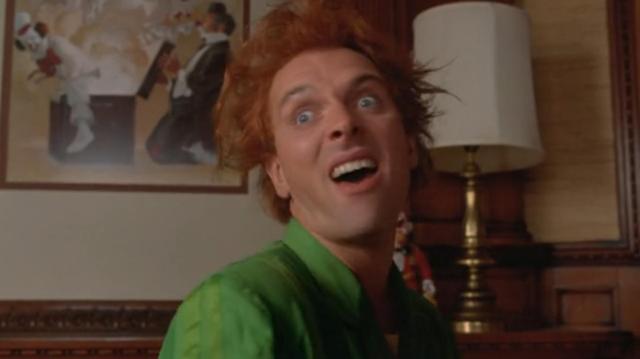 Which makes this a rare case of Fred being blamed for something by an adult.

Drop Dead Fred is the imaginary friend of a young girl named Elizabeth. Only she can see him and hear him, but he’s quite capable of interacting with the world when he wants to, and he engages her in all sorts of shenanigans. But children always grow up, and so does Elizabeth. She moves out of her mother’s house, gets a car and a job, gets married, and forgets all about Fred. Played by Phoebe Cates, she has a life she believes makes her happy. And then her husband leaves her, she loses her car and her job, and her overbearing mother (Marsha Mason) strong-arms her into moving back home. And suddenly Fred is back in her life.

Here’s a fun thought experiment if you’re interested in stories. Take a major character from one story, and transplant them into another. Doesn’t have to be a different genre, though it can be; it just has to be a story that isn’t theirs. See what you end up with. Sometimes you wind up with an interesting story. Take Jeff Spicoli, give him a friend, and put him in Back to the Future, and you wind up with Bill and Ted’s Excellent Adventure. Put Pinocchio in the far future as inspired by Blade Runner, and you get A.I. (even if I didn’t like the ending, I still admire the story.) Of course, sometimes — most often — you wind up breaking the story. There’s an old joke I’ve heard from Shakespeare fans that Othello and Hamlet would have had no problems in each others’ situations; one acts too quickly, one too slowly, switch them around and everything works out. Put Tom Sawyer and Huckleberry Finn in Lord of the Flies, and no misfortune would have befallen those kids before rescue. Put the Terminator in a romantic comedy and it would fail because there’s nothing to work with. You’d get about three minutes of laughter at the concept, and that would be it. Moving a character out of their natural context is a risky proposition; it can be interesting, or it can break the story one way or another.

Which brings us back to Drop Dead Fred. Fred is an interesting character to look at from the perspective of a writer analyst because Fred somehow manages to be an out-of-context character in his own story. As is repeatedly pointed out by Elizabeth, Fred doesn’t belong in her life any more. She’s grown up. She’s not supposed to need an imaginary friend any more. But Fred is fully aware that Elizabeth is unhappy, and so he sets about doing an imaginary friend’s job, attempting to brighten up her life. But although Fred has learned a grown-up’s vocabulary in the time of their separation, he hasn’t acquired a grown-up’s perspective. His solutions to things are still on the level of a five-year-old: vulgar, silly, and short-sighted. He’s a comic cartoon character trying to make things work in what would otherwise have been a coming-of-age drama.

And that, I think, is why the film became a cult classic rather than a straight hit or miss. Because it’s all about how well you respond to Fred. Certainly none of the other characters are all that relatable. Elizabeth is a wallflower for most of the movie. Her mother is horrifyingly narcissistic and domineering, but while we may be repulsed by her we aren’t going to laugh at her. And all the side characters are little more than standard roles with little to make them stand out (though Carrie Fisher has a small-but-memorable part as Elizabeth’s best friend). If someone is going to like the film, it’s because they like Fred. And that’s not going to be universal, because Fred isn’t built around the same audience that the story is aimed at. The film’s story is for young adults, and Fred’s a five-year-old, in mind if not in fact. In order to like Fred, one has to remember to be a bit like Fred. His humor is juvenile and cringe-worthy and sets up one disaster after another… and liking Fred means getting in touch with one’s inner Fred and laughing at things that only children are supposed to laugh at. It’s probably not a coincidence that the film’s biggest fans are those who were kids when it was made. Nostalgia helps to put Fred in his proper context.