Eight movies into an increasingly untenable franchise, it would be strange to say that I’ve been anticipating a particular installment. It would not, however, be entirely wrong, as Jason Takes Manhattan is an entry that has acquired a certain degree of notoriety on its own. Some of the series fans seem to hate it, some seem to love it, but unlike, say, installment 9, people actually talk about it a bit. So I was a little curious to see exactly what I would think of the film when this year’s third Friday the 13th came around.

I think both sides of the debate on this one have some very valid points.

The basic rudimentary plot is as formulaic as ever. Jason (Kane Hodder) comes back to life through dubious means and begins stalking and killing a group of teenagers. In this case, though, he’s not on the shores of Crystal Lake, but on the lake itself (which has somehow morphed to be adjacent to New York City — either that or Jason’s body has spontaneously teleported to another body of water. I guess I can’t put it past him….) Much of the film takes place on a cruise ship hosting a graduation party, so Jason doesn’t take Manhattan immediately. 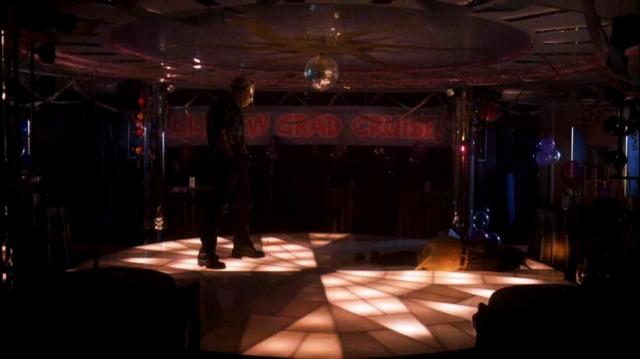 Nor does he take to the dance floor to show off his slick disco moves.

Keeping things confined to the cruise ship does allow for an interesting variation on the game of cat-and-mouse. Once the kids are aware there’s a threat, they go on the hunt themselves, even sensibly grabbing some weapons — though, less sensibly, splitting up. That GEICO commercial which states you do dumb things in a horror movie holds perfectly true here. In point of fact, Jason almost does more damage to them by his mere presence than by actually attacking them; the body count, even not counting the people Jason himself kills, is pretty high thanks to the mistakes made by the victims. I’m not totally certain, but it’s possible that at one point Jason is actually behind on the homicide leaderboard.

A lot of this is down to the adult figures in the film. Peter Mark Richman and Barbara Bingham play the supervising adults on the cruise, and they are paired against each other as the unreasonable and reasonable authority figures, respectively. The problem is that although Richman’s character is indeed a moron of epic proportions, Bingham’s character is one who merely sounds reasonable. She makes as many bad calls as the principal, and kids die — or are left for dead — as a result. As usual, it’s a pair of kids who are semi-reasonable, with Jensen Daggett playing the female lead and Scott Reeves playing her marginally-competent boyfriend. Daggett’s character is haunted by visions of Jason, adding to the supernatural feel of the film, but also to its cheesiness.

And cheesiness is the word of the day for this film, and is what I meant when I said both the detractors and the fans had valid points. In terms of anything that makes a good movie, even a good horror movie, Friday the 13th Part VIII is deficient. The plot is thin, the characters are thin and idiotic, it’s not scary, it’s not suspenseful, and it’s only occasionally surprising. It’s just a poor film all around. But it’s so damned cheesy that it’s fun in its own goofy way. It provides numerous places for a viewer to jump in with jokes about what’s going on… and that’s not a bad thing, really. Any form of enjoyment is still enjoyment, and there are certainly a lot of bad films out there that don’t provide even that kind of pleasure. So while I can’t say I liked the film, I also can’t say I disliked it. It’s cheese, but taken as cheese, it works.