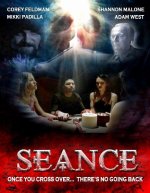 Also known as Killer in the Dark, this film was never officially released. Not to theatres. Not to television. Not to home video. Instead, though it was made 14 years ago, it was released online this year by its creator, Rick Vasquez, who wrote and produced the film; it is the sole film to his credit. Directing credit is given to a John Preston, whose sole other credit is a direct-to-video documentary on boxer Jim Braddock.

Normally I’d skip over such a minor release unless there was something about the premise or reputation or cast that intrigued me. In this case, it was the cast. Where else could I find Corey Feldman in the same film as Adam West?

Those two b-movie luminaries are easily the highlights of this film, as the only other veteran actor is Chris Casamassa, probably best known for his role as Scorpion in Mortal Kombat. The rest of the cast is made up of actors with little or no prior experience, and it shows.

It is perhaps uncouth to kick a film when it’s down, and given the film’s release history, it’s about as down as a film can be. But there’s no kind way to say this: the movie is terrible. The acting, even from Feldman — who I’ve seen turn in a decent acting job in films! — is extremely stiff and stilted. Casamassa and West do all right, but only all right. Everybody else is awkward at best in their roles. I have to put it down to a combination of inexperience on the part of most of the actors and inexperience on the part of the director, who really should have been able to get passable performances out of at least the more experienced actors.

But mostly the problem is the writing. The plot’s passable: a group of young adults hold a seance to contact a ghost that once haunted the brother of one of them, in an attempt to find out if he really was real. After making contact, however, they find he’s possessed a serial killer and is now after them. It could have worked; successful horror movies have been built out of less than this. But the dialogue is trite and hackneyed and overly melodramatic. It is rare that a character utters a line that hasn’t been said in a dozen films before it. I felt sorry for Feldman — not his character, Feldman himself — when he was grabbing one of his co-stars by the shoulders and asking “Where’s the brave, strong girl I used to know?” at the top of his lungs.

The special effects are pretty hokey, but this is only to be expected from a low-budget film. They would have been easy enough to forgive had the writing been better. But the dialogue makes the characters impossible to believe in or care about, and often makes it hard to understand just what’s going on. People who are fans of Feldman or West may be inclined to track this down out of curiosity. Don’t bother. Let it be enough just to know it’s out there.