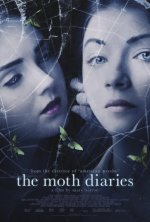 I must admit that I misjudged this film based on its title. The Moth Diaries is not a name that particularly points to what the story is about, and my initial suspicion — given that I hadn’t heard of the film before — was that it was a direct-to-video knockoff of The Mothman Prophecies. (It’s the sort of title Asylum or another knockoff company would give to such a film.) As it turns out, I was wrong on that. The film, directed by Mary Harron of American Psycho fame, did have a theatrical release, if only a very limited one, and has nothing to do with the similar-sounding film of nine years prior.

Instead, it’s a Gothic-inspired psychological thriller set in a boarding school.

Sarah Bolger and Sarah Gadon play Rebecca and Lucy, best friends and roommates at an isolated Canadian boarding school. Rebecca lost her father to suicide a few years prior; most of the girls at the school have some personality flaw or dark personal issue from their past that explains their need for the boarding school, with the exception of Lucy. Rebecca clings to Lucy tightly as her anchor in the school. This is disrupted when Lucy becomes friends with the new girl in school, the aloof and odd Ernessa (Lily Cole).

Ernessa is mostly withdrawn from the other girls, but is very demanding of Lucy’s time. And she keeps making creepy commentary about death to Rebecca, emphasizing the similarities in their own past tragedies. She is seldom seen during daytime hours, and is often spotted walking the grounds at night. She’s a prodigy in many fields from language to music. And she never seems to eat. All the while, the more Lucy spends time with Ernessa, the more frail Lucy appears to become. With a new literary teacher filling her head with stories of Dracula and Carmilla, Rebecca comes to the conclusion that Ernessa is a vampire targeting Lucy.

Naturally, she is unable to convince her other friends or any of the school staff that Ernessa poses a threat to anybody. But what’s interesting about the film is that it also isn’t attempting to convince the audience of this entirely. Instead, for the most of the film, it leaves open the question of whether Ernessa really is a vampire or if it’s all a product of Rebecca’s morbid imagination and jealousy. We don’t know whether to believe Ernessa is supernatural; we believe only that Rebecca believes.

The result is a low-key psychological thriller that, while never quite exciting the audience, keeps a viewer reasonably engaged in what happens next — even if we’re not sure whether the real threat is Ernessa or Rebecca.

1 Response to The Moth Diaries